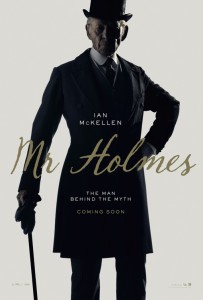 Mr. Holmes is like a charming piece of meta-fiction about the world’s greatest detective (no, not Batman).

Long retired and with a failing memory, the great Sherlock Holmes (Sir Ian McKellen) struggles to recall his final case, one which has haunted him for the past 35 years.

There has been a surge in Holmes popularity over the past decade, including the Robert Downey Jr-led action franchise, a present-day reworking starring Benedict Cumberbatch and the House TV series (seriously, Dr. House is Sherlock Holmes as a physician).

But Mr. Holmes offers an ingenious, very self-aware reinterpretation of the character.

McKellen flawlessly conveys the solemn dignity and frailty of a brilliant man fighting against his senility and whose own legacy has overtaken him. Displeased by his old friend Watson’s fictionalizations of their cases, Holmes wishes to restore some truth to his image before he dies by recording his traumatic final case as it really happened – if he can dredge up the details.

Mr. Holmes is a poignant, introspective and distinguished drama, and is a great tribute to the classic Sherlock Holmes character.

A freelance writer seeking to share my passion for writing and put my name out in the world.